Rolan Warrior, an Inupiat guide from Kaktovik, was taking tourists to a barrier island to watch polar bears when he noticed one of the bruins caught in a net.

“From rescue to conflict reduction efforts, Northern communities play an important role in the conservation of polar bears—

they are on the ground 24/7 and have important experience and perspectives passed down from generations untold,” said Geoff York, Polar Bears International’s Senior Director of Conservation.

Kaktovik residents in boats kept the bear from drowning until the tranquilizers set in.

They then maneuvered the bear to shore where the net could be removed.

Biologists were able to untangle the bear, check for injuries, and release it.

“It’s great to see local people and scientists come together to solve a clear problem.

In this time of unprecedented change, we need more collaboration across the Arctic and across groups,” York said.
Source

The relationship between bears and Inuit people of that region is a delicate balance between predators – and on this day – it was Inuit volunteers in small boats who saved the life of the great Nanuuq.( Polar bear Kaktovik Inupiat name) 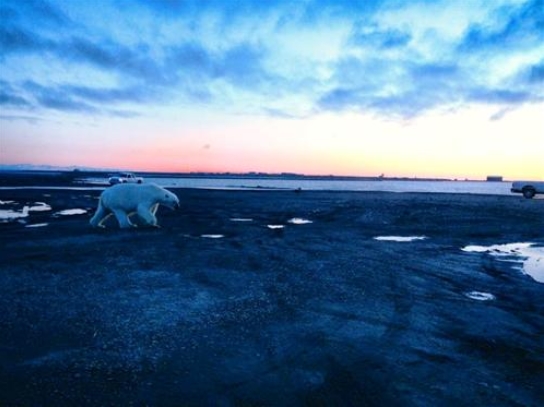