There are so many animal lovers and they just did not let go of any opportunity to help animals in need. It does not matter to them how difficult the task is.

Like these two retired prospectors who went out of their way to help save a hopeless moose from death. Some time back, Maurice Valliere and Pat Greba both of them are 70 years old and they helped to rescue a moose that got itself trapped in a swamp, in the forests of Timmins, Ontario.

The incident is like this that Valliere was at his place when his friend called him and told him about the helpless moose caught in a deep mud hole.

At Valliere tried to contact the Ministry of Northern Development, Mines, Natural Resources and Forestry by phone but they did not pick the call. He was really concerned and took the matter into his own hands and he called Greba and together they rushed to save the distressed animal.

They knew that every moment was critical for the moose. They took their ATV and went towards where their friend guided them. It took nearly two hours for them to reach the moose. According to Valliere, when he got the call from his friend, he was at home.

His friend had gone there to collect soil samples and he found a moose 20 feet from the road. When Valliere went to search the moose, he only saw the head of the moose and it seemed like he was buried in the mud. 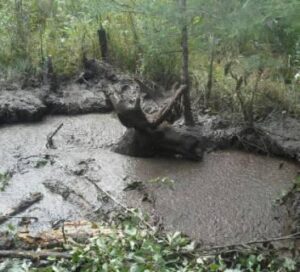 The men immediately noticed that the situation was very complicated as the moose was very much confused and he was unable to keep his head afloat. At first, they tried to calm him down, and then they got hold of his horns with a cloth-like rope and tried to pull him out.

The moose was in a bad condition as his mouth was full of mud and his eyes were full of mud. He was struggling and tried to reach the man with his legs but could not.

Valliere even took his dog a white Labrador along with him and the dog helped the moose to calm down. The dog just went to the moose and laid his head down and the moose felt okay and he calmed down. The men were finally able to free the moose.

Greba found some time to click the photos of the dramatic rescue which were shared on Facebook by another friend, Bill Deslogs.

From the photos, it was clear that the rescue was very difficult and the two men were the real heroes. Really they did a great job!