Many animals are scared during fireworks, but one pregnant horse got herself into a dangerous situation a few years ago after she broke out of her stall.

The horse got her hoof stuck between railroad ties on a Canadian National bridge in Union Township near Valparaiso, IN but luckily was spotted by a woman driving in the area.

The Good Samaritan immediately called the Canadian National number posted at the crossing to alert them of the emergency and then called the local sheriff’s office, who was able to halt the approaching freight train.

The woman also spoke to a couple living next to the tracks and they, in turn, gathered together a group of neighbors to come to the horse’s aid.

They used nylon straps to pull the horse up and lay down plastic tables to prevent the mare from catching another hoof.

The video below capture the the dramatic rescue on film!

The horse named Anna was fine after her ordeal and shortly after she gave birth to a healthy filly.

It turns out Anna had been saved just the month before her accident from a kill auction by her family! 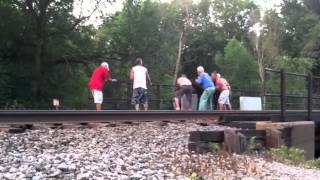 So Anna and her baby were doubly lucky! 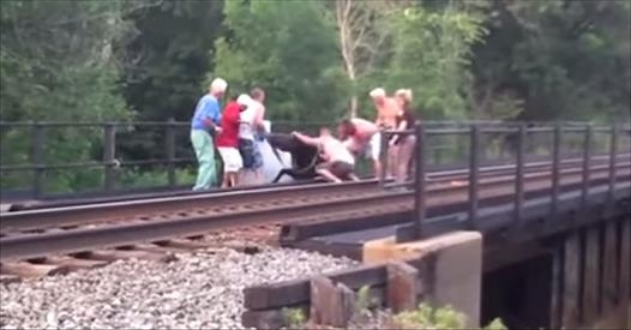