Thankfully, the giraffes are in a preserve that takes poaching very seriously and they should be pretty well protected.

Incredibly rare with what appears to be only a handful sightings in the wild captured on film, white reticulated giraffes are pale in color thanks to a genetic condition called leucism.

Unlike albinism, in leucism skin cells don’t produce pigmentation, but soft tissues, like dark eyes, do.

The giraffes were in the region where Rainforest Trust and HCP are protecting vital habitat for the Hirola, the world’s most threatened antelope, explains RT.

“Early june this year, reports of a white baby giraffe and its mother were reported to us by the rangers who got the report from one of the villagers adjacent to the Ishaqbini conservancy.

We hurriedly headed to the scene as soon as we got the news.

And lo! There, right in front of us, was the so hyped ‘white giraffe’ of Ishaqbini conservancy!” 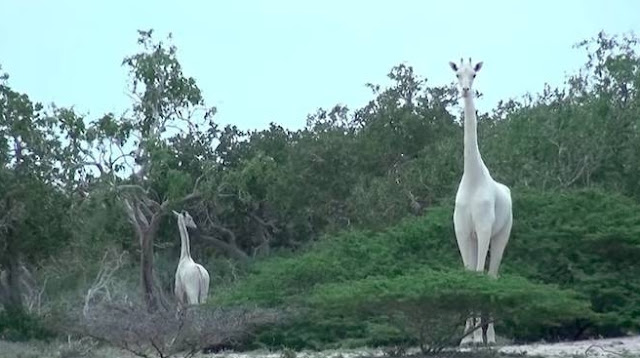 Thankfully, the giraffes are in a preserve that takes poaching very seriously and they should be pretty well protected. And in the meantime, the ghosty giants are working as ambassadors of Mother Nature, reminding us again of just what an incredible world we live in, white giraffes and all.