A heartwarming video has surfaced of the group performing a rescue effort on two adults and two youngsters who were trapped and were weeping and gasping for breath.

The dolphins are said to have spent the day in the bay hunting herring until the two youngsters swam too near to land and were beached at low tide.

The dolphins are said to have spent the day in the bay hunting herring until the two youngsters swam too near to land and were beached at low tide.

According to One Green Planet, the adult dolphins would have gone to rescue their young, only to get stranded due to the dropping tide.

The incredible video shows a pod of dolphins wailing while trapped on the beach at low tide, unable to go back into the sea. Two of the surfers in black wetsuits can be seen carrying the marine animals on beach towels and into the ocean. 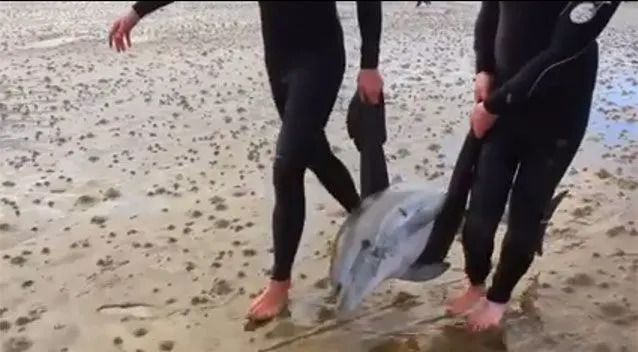 As they spray one dolphin, one of the rescuers tells his friend, “Get some water on him.”

A female surfer soon joins the males to assist in rolling a second dolphin onto a towel and carefully dragging it over the sand on a blanket.

As the group slowly brings the creature to the shore, the woman can be heard stating, “He’s really heavy.”

The dolphins were transferred to deeper water, but they were still unable to swim freely, according to a description accompanying the footage. 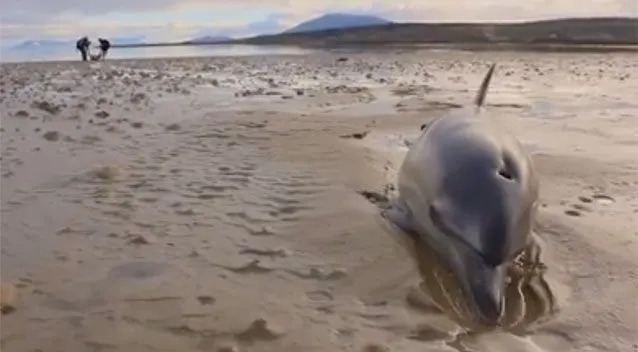 According to One Green Planet, dolphin beachings occur often in the Erris region (a barony in County Mayo, Ireland), with an average of four strandings per year, involving anything between four and thirteen dolphins at a time.