This little seal has gone through strange series of events since she last saw her ocean home, but thanks to a curious herd of cows, she’s now back where she belongs.

Celebration became caught in the mud in the Frampton Marsh nature reserve in the United Kingdom, where she was discovered by a herd of 30 cows who gathered around to observe the unexpected newcomer.

When Ian Ellis noticed the odd cluster of cows while he was bird-watching, he took out his telescope to get a better look and was surprised to see a seal pup in the midst of the group of curious cows.

When it became evident that her mother was nowhere to be seen, rescuers rushed to the scene and took the small pup in for treatment. She was underweight and dehydrated, and a lung infection developed.

She did, however, find a temporary home at Skegness Natureland Seal Sanctuary, where she was raised and treated for her sickness.

She also made a buddy in the form of a seal named Charlie, who arrived at the same time as her.

Celebration has been concentrating on the one duty that a newborn seal pup has: eating as much as possible since then.

Natureland eventually decided that she and Charlie had gained enough weight to come home.

Celebration stares out at the water as she prepares to plunge in, finally back where she belongs, in a shot taken shortly after her release. It’s all down to a birdwatcher and a couple of perplexed cows.

Celebration was returned to the ocean by Ellis and the Natureland crew, which she hadn’t seen since she was a pup.

She and Charlie began to waddle back to the waves they call home as soon as the doors to their cages were raised. 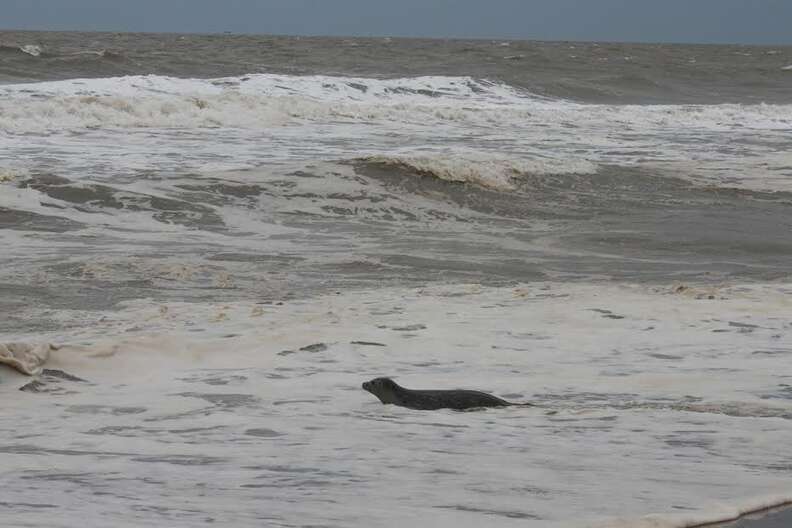