When the Europeans first began arriving on this continent they were amazed that Indian women were very much unlike European women.

Indian women were not subservient to men, they often engaged in work – such as farming and warfare – which the Europeans viewed as men’s work, they had a voice in the political life of their communities, and they had control of their own bodies and sexuality.

Unlike the patriarchal European societies, Indians were often matrilineal, a system in which people belonged to their mother’s clans or extended families. When Indian people spoke of a neighboring tribe as “women” or as “grandmothers”, the Europeans often misinterpreted this compliment as a derogatory statement.

When asked to name some famous Indian women, most people have difficulty in recalling anyone other than Pocahontas and Sacajawea. Both of these women have legends which are more based in non-Indian fantasies about Indian women than in the reality of their accomplishments. For both, their fame is based on their association with non-Indians.

Europeans have always viewed war as “men’s work” and their interpretations of Indian warfare, as seen through the writings of non-Indian historians and anthropologists, assume that only Indian men were warriors.

They often fail to see that women warriors were common among Indian people. Women warriors went with their husbands on the war party. Some of the examples of nineteenth century women Indian warriors are briefly described below.

Fallen Leaf (often called Woman Chief by the Americans): While Fallen Leaf was a Crow warrior, she was actually born to the Gros Ventre nation and was captured by the Crow when she was 12. After she had counted coup four times in the prescribed Crow tradition, she was considered a chief and sat in the council of chiefs. In addition to being a war leader, she was also a good hunter and had two wives.

Running Eagle: she became a Blackfoot (Piegan) warrior after her husband was killed by the Crow. To avenge her husband’s death, she sought help from the Sun and was told “I will give you great power in war, but if you have intercourse with another man you will be ki lled”.

After this she became a very respected war leader and led many successful raids on the large Flathead horse herds west of the Rocky Mountains. She was on a raid in Flathead country when she was killed. She had had sexual relations with one of the men in her war party and for this reason lost her war power.
src=”http://4.bp.blogspot.com/-4BGGcTwIzn0/VLLwGMIBbzI/AAAAAAAAvqw/3Eeig7QJ_JY/s1600/ScreenShot3091.jpg” width=”640″ height=”362″ border=”0″ />

Colestah: In the 1858 battle of Spokane Plains in Washington, Yakama leader Kamiakin was nearly killed when a howitzer shell hit a tree and the tree branch knocked him from his horse.

Riding into battle with Kamiakin was his wife Colestah who was known as a medicine woman, psychic, and warrior. Armed with a stone war club, Colestah fought at her husband’s side. When Kamiakin was wounded, she rescued him, and then used her healing skills to cure him.

Buffalo Calf Robe: In the 1876 battle of the Rosebud in Montana, American troops under the leadership of General Crook along with their Crow and Shoshone allies fought against the Cheyenne and Lakota Sioux.

The Shoshone and Crow shot the horse of Cheyenne Chief Comes in Sight out from under him. As the warriors were closing in to finish him off, Buffalo Calf Robe (aka Calf Trail Woman), the sister of Comes in Sight, rode into the middle of the warriors and saved the life of her brother. Buffalo Calf Robe had ridden into battle that day next to her husband Black Coyote. This was considered to be one of the greatest acts of valor in the battle. 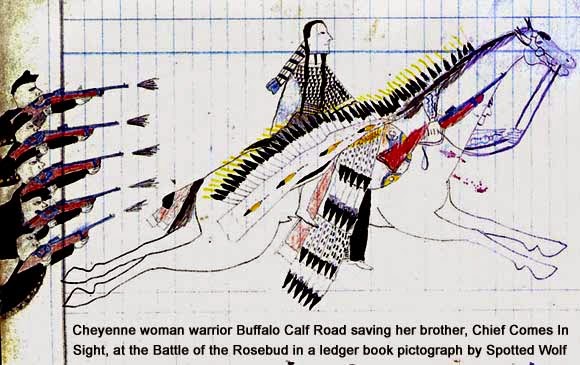 Moving Robe: One of the best-known battles in the annals of Indian-American warfare is the 1876 Battle of the Greasy Grass in Montana where Lt. Col. George Armstrong Custer was defeated. One of those who lead the counterattack against the cavalry was the woman Tashenamani (Moving Robe). In the words of Lakota warrior Rain-in-the-Face:

“Holding her brother’s war staff over her head, and leaning forward upon her charger, she looked as pretty as a bird. Always when there is a woman in the charge, it causes the warriors to vie with one another in displaying their valor.”

It is evident from the words of Rain-in-the-Face, that having a woman lead an attack was not unknown to Lakota warriors.
Source