Photographer Asher Svidensky captured a stunning collection of images that shed a light on Mongolian girls and their golden eagles.

>Svidensky was focused on the story of one particular girl, 13-year-old Ashol Pan, who was asked by her father to take the place of her brother after he left for the military
Pan took up the challenge, and even though she still attends school, developing a lifelong bond with her eagle has quickly become her sole focus in life.
It’s no easy task – training a young golden eagle involves blindfolding the animal for prolonged periods of time so that it develops a dependence on its handler, and can often involve sacrificing sleep in order to care for the bird of prey.

Unlike many of the young boys, who seem uneasy alongside their hunting companion, according to Svidensky,

Pan is at peace with the animal by her side.
This is an essential part of the pair’s bond, especially as the village relies on the eagle to hunt down elk and  rabbits, all of which provide food and pelts to survive the harsh winter months.

Golden eagles are deeply engrained in Kazakh culture, and make an appearance in many ancient proverbs, such as,
“Fine horses and fierce eagles are the wings of the Kazakhs.

” It’s beautiful to witness the next generation ensuring the legacy of a hunter and their eagle lives on for all to see. Should you ever find yourself in Mongolia, an annual Golden Eagle Hunting Festival allows more than 50 eagle hunters to showcase their skills.
> 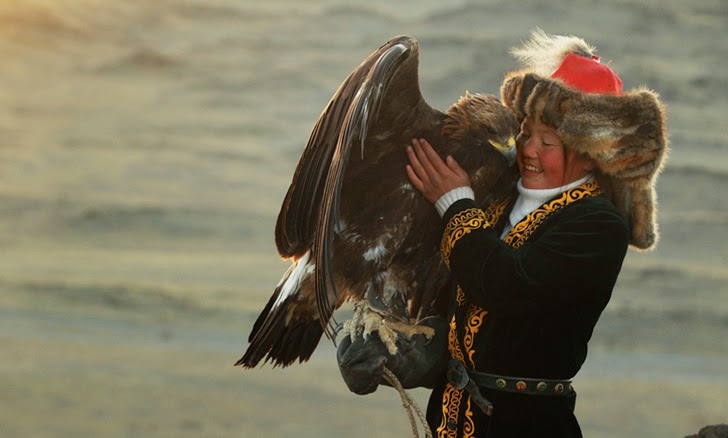