A 375 lb. black bear was becoming too familiar and close to a residential area in Alligator Point which is near Tallahasse, Florida.

Not wanting to hurt the bear but instead move him away from the houses, wildlife officials made the decision to trap him.

In order to do this they first had to tranquilize him with a dart gun.

When they shot the bear with the tranquilizer, it startled him and he ended up running toward a lake.

The tranquilizing dart didn’t tale effect right away so the bear managed to swim at least 25 yards before becoming drowsy.

It was at this point that Adam Warwick, a biologist with the Florida Fish and Wildlife Conservation Commission, decided the bear needed help and dived in after him.

“I wasn’t sure what I was going to do when I jumped in. It was a spur of the moment decision.

I had a lot of adrenaline pumping when I saw the bear in the water. I wanted to keep him from swimming into deeper water,” he said.

The bear soon started to his ability to move its legs, and at this point he became distressed.
Adam Warwick decided to try to create a splash to herd the bear back to shore.

But the bear was very confused and as he reared up on his hind legs toward Warwick, he fell backwards and began to instantly sink under the water.

Adam knew at this that point he had to keep the bear from drowning. 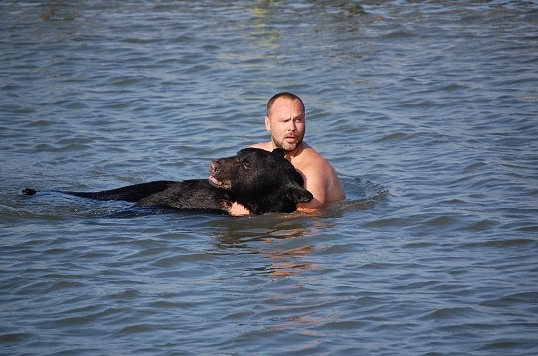 After a few seconds the bear popped his head up out of the water and thrashed around a bit, but could obviously no longer keep his head above water.

Adam kept one arm underneath the bear and gripped the scruff of the bear’s neck with the other to keep its head above water as he dragged the bear back to shore. 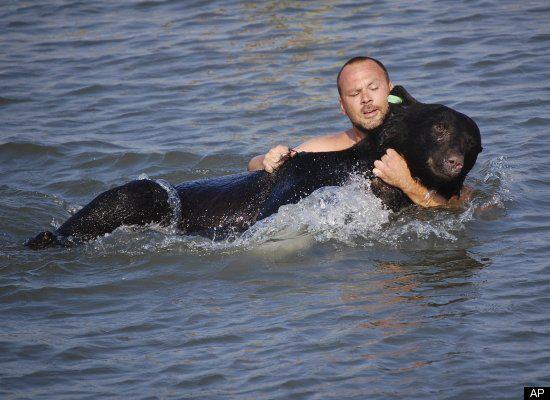 Amazingly he only suffered a cut foot from barnacles and just a single scratch from the bear.

The bear was loaded into a tractor bucket and taken to a wildlife officer’s truck and was then released in Osceola National Forest. Adam summed up his experience by saying,

“It’s a lot easier to drag a bear in four-foot water than move him on dry land.”