For the first time in nearly 150 years, bison will roam a new corner of a South Dakota national park. It’s a vital step in growing the population of America’s national mammal.

Badlands National Park officials released four bison into a newly expanded range on Friday. And if the way they careened out of their trailer onto the snow-covered plains is any indication, it seems the bison immediately made themselves at home.

The new real estate came from a land swap with a local ranch that blocked bison from entering the less rugged side of the park. Park officials worked with the US Forest Service and World Wildlife Fund among others to secure the additional 22,000 acres of land in 2014, according to the National Park Foundation.

The project also included new fences along the perimeter of the new land to separate bison from local cattle.

Find the best national parks for your favorite outdoor activities

Around 1,200 bison now live in the 244,000-acre park, and their health secures the health of their ecosystem, the foundation said.

All that noshing on grassy plains creates the preferred environment for prairie dogs to set up shop, and those populations attract other animals like coyotes and birds of prey that keep the ecosystem in check. 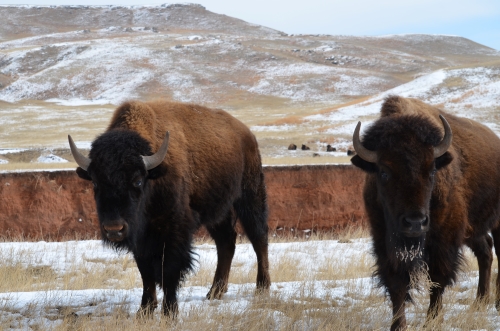 The park protects 242,756 acres (379.3 sq mi; 982.4 km2) of sharply eroded buttes and pinnacles, along with the largest undisturbed mixed grass prairie in the United States.
The Stronghold District of Badlands National Park, co-managed by the National Park Service and the Oglala Lakota Tribe.
For 11,000 years, Native Americans have used this area for their hunting grounds.

Long before the Lakota were the little-studied paleo-Indians, followed by the Arikara people.

Their descendants live today in North Dakota as a part of the Three Affiliated Tribes.
Archaeological records combined with oral traditions indicate that these people camped in secluded valleys where fresh water and game were available year-round.