The police officer decided to write her a ticket, and asked her to wait in her car is since, according to her, it wasn’t that hot.
The police officer called her “callous”. She called what he did “abusive”, but when the woman who admitted to leaving her dog in a hot car called a news station to complain, she ended up with a dose of karma instead.

KOB News investigated what happened and after the woman asked the news channel to look into her complaint against the officer, saying that he forced her to sit in the hot car she had left her dog in.

Officer Vincent Kreischer noticed a dog inside a parked truck at a grocery store’s parking lot in Truth or Consequence, New Mexico, with the temperatures outside of over 90 degrees Fahrenheit and confronted the owner.

The woman told him she only left the dog for 10 minutes, and began to argue with him about how hot it really was. But Officer Kreischer estimated that inside the vehicle would be 114 degrees after that length of time.

When he confronted her, he says she shrugged it off with a laugh and was “callous and carefree” about her dog’s welfare.

That’s when he took action. He decided to write her a ticket, and asked her to wait in her car is since, according to her, it wasn’t that hot.

“You can wait in the truck and close the door you know, since it’s not that hot,” he responded.

He observed, “She gives me an attitude from word one, and then she doesn’t want to close the door. So I’m like, ‘Oh, but it’s OK if your dog does.’” 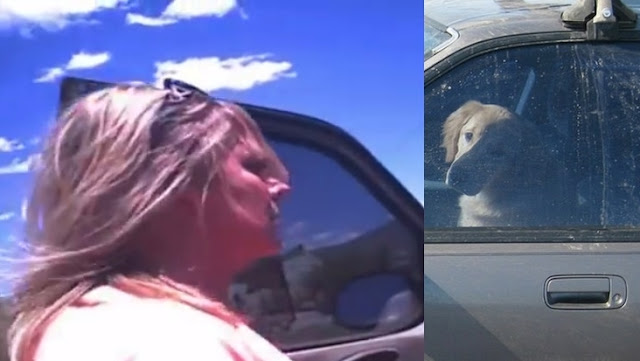