A dog was reported missing off the coast of San Diego, California.

It was two miles from San Clement Island. The one-and-a-half-year-old German shepherd was presumed to be drowned in the pacific ocean after fell off a fishing boat.

Luna was with her owner,

Nick Haworth on a commercial fishing boat when she fell, overboard. On the 10th of February, the owner reported that Luna is missing, and after days of

searching the dog was eventually presumed gone. Nick searched the waters for about two days and Navy staff searched the island for about a week but no sign of Luna.

He insisted that he was 90 percent sure that she made it to shore because she was such a good swimmer. They were pulling in their lobster traps, and one minute Luna was there and the next minute she was gone.

They looked everywhere for her but unfortunately, they couldn’t see her.

The water was dark, and she is dark!

There are no domesticated animals on the island, so it was a stunning sight that she was sitting on the road and waggling her tail. 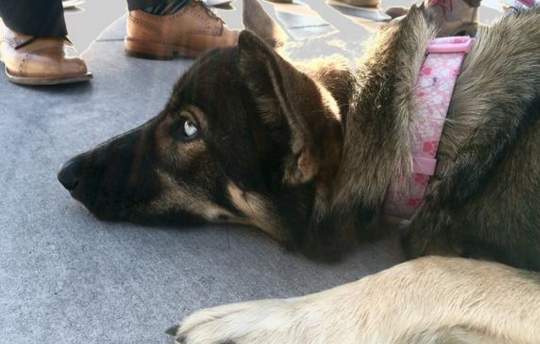 The dog is believed To have swum ashore and survived by eating mice on the island. She was examined by the wildlife biologist for the San Diego zoo and said she was perfectly healthy other than being a little undernourished.